Woman Confronts Man For “Creepy” Behavior At The Gym 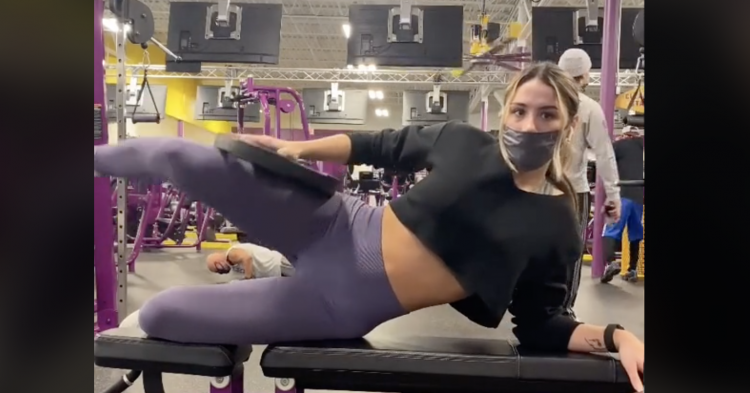 A woman has turned to TikTok to share her recent experience at the gym. After she noticed a man seemingly taking photos of her while she was working out, the young woman, who posts to TikTok under her username, JuliaAPic, has built up a career as a fitness and lifestyle blogger. Because she spends her days creating content for her fans, she found it very worrisome to realize that a strange man was stalking her and photographing her while she was hitting the gym in her community.

Although Julia has a lot of engaging content on her TikTok platform, her most popular video has nothing to do with fitness tips or recipes. Instead, it has to do with how the man was acting around her while she was working out at the gym. In her video confessional, Julia explains that she caught the man spying on her and even snapping pictures of her body while she was in various workout poses. Now, she wants to know if she was right to think the man was being creepy for what he was doing while she was working out.

“Was filming a workout back in January when this happened,” Julia wrote in the TikTok. She added, “I was honestly gonna post this on here when it happened, but it was a bit too sensitive at the time, lol. genuinely curious what you guys think.”

In the video, Julia explains that she was filming herself working out and was watching herself in the mirror. Because she was attentive to what she was doing, she noticed the creepy man in the background snapping photos of her at the Planet Fitness location.

Although she confronted the man about whether or not he took a picture of her, he denied that he was doing that. This technique, known as gaslighting, led Julia to question herself even though she caught the guy red-handed. He was caught on camera squatting down behind Julia’s backside with the camera in his hand pointing in her direction. It sure seems like he was snapping photos of her while she was working out. The man then approaches another man and shows him his phone, which could have the picture on it.

TikTok users largely agreed that the man was snapping pictures of her while she worked out.

One person urged Julia to “show (Planet Fitness) staff. Get him banned!:

Another person wrote, “He def took it. If you look closely, you can see his phone in his hand taking it. He showed it to his friend? Girl, I’m so sorry this happened to you.”

“He absolutely did,” wrote a man named Ryan. “And he showed it to his friend. I’m sorry.”

“I would have taken this video right to the front desk and showed them. It definitely shows a picture could have been taken.”

“He looked nervous the whole time!” wrote another fan. “He definitely took a picture. You can tell how he’s walking like a clown.”

What do you think happened? Was this guy taking photos of Julia while she worked out?

was honestly gonna post this on here when it happened but it was a bit too sensitive at the time lol. genuinely curious what you guys think