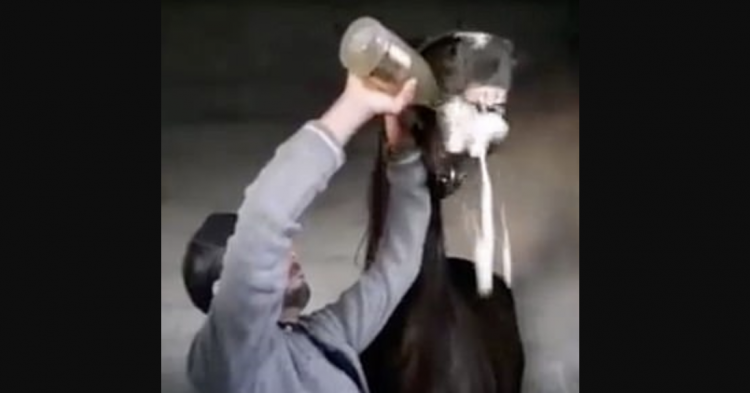 Although fans of horse racing in Mallorca, Spain, have watched victors pour an entire bottle of champagne down the throat of the winning horse for years, animal rights activists are now calling the tradition animal abuse. Footage shows the moment that men force the winning horse to guzzle down an entire bottle of bubbly wine after winning Mallorca’s Manacor Grand Prix on Monday.

The horse was forced to remain still while a man poured the beverage down the animal’s throat. Someone was holding the reins of the horse while this happened, so it could not resist and move away from the open bottle of alcohol. 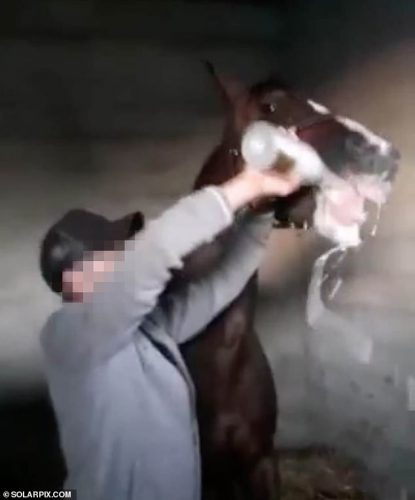 An animal welfare society has branded the action “appalling” and identified the victimized horse as Helen Llinaritx. The footage is alarming because the man forces the alcohol down the quadruped’s throat. The horse does not want the champagne; yet, the man tries to force it to drink the entire bottle. He almost succeeds in getting the animal to consume the entire bottle.

During the abusive moment, the horse tries to get away from the man. It pulls its head as the man forces the bottle’s opening between the horse’s teeth and empties the liquid down the horse’s gullet.

When he is done forcing the animal to drink, the man affectionately kisses the horse on the nose. The gathered crowd in the background then erupts into applause and cheers. 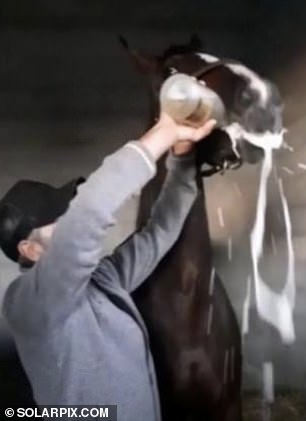 Balearic Islands’ Animal Association Assaib said: “This idiot made the winning horse Helen Llinaritx drink a bottle of champagne. We have already lodged a formal complaint with the relevant authorities for animal mistreatment.”

The group also said: “We would like to express our indignation over what happened following the Manacor Grand Prix. It is clear from the footage that Helen Llinaritx is made to drink a bottle of champagne while the rest of those present laugh at what is happening. We consider this clear example of animal mistreatment appalling, and it shows that this person doesn’t respect animals.”

Readers of Daily Mail were also outraged that this occurred. 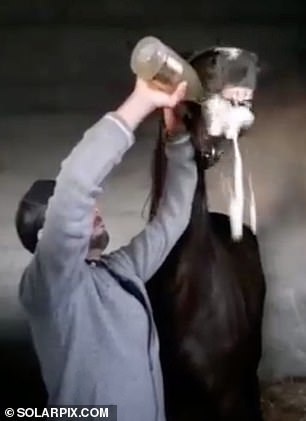 “Well at least with this act of animal cruelty, the person is known. Anyone with half a brain would sack him immediately. His name will be mud now and charge him too for animal cruelty. I expect he was drunk, as were his cheering friends. They are all idiots.”

“I cannot believe people are condoning this idiot’s behavior. All for a cheap laugh.”

“That’s cruel. Should not be allowed an animal after this. What would he have done to the animal if he had lost?”

“Why did he do that? Any action forced on an animal is abuse, and the man should be removed from the animal’s location.”

One person claimed it was not as bad as it seemed.

“A friend of mine, who owns donkeys, often gives them bottles of beer, which helps to alleviate equine anhydrous, (QV). Not to mention the pleasure it gives the donks! I, personally, am jealous of our gee-gees because, unlike humans, they can still take a tipple but still improve their health, not get tipsy, not get overweight, not get a hangover, not get in a fight and still stay on their feet.”

What’s your opinion? Should this man be charged with animal abuse?