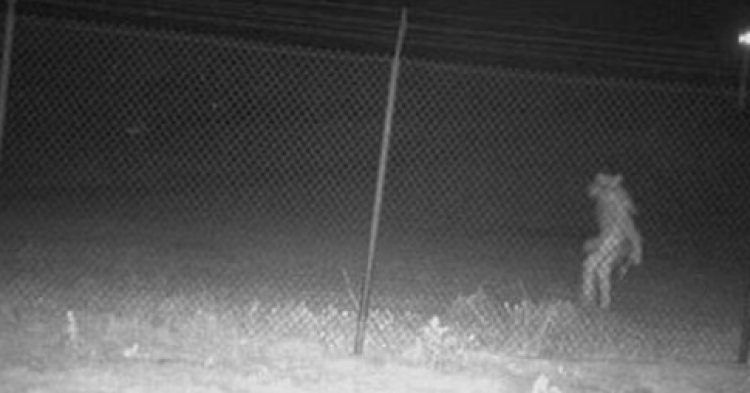 Residents of Amarillo, Texas, are not going to sleep well after seeing these “creepy” visitors to a local zoo. And some people are even going so far as to claim that the deadly Chupacabra is on the loose in Texas. However, zoo officials are at a loss for an answer to what the human-like creature caught on surveillance footage was as they turn to social media to get thoughts from people across the community and the world.

While the Amarillo Zoo may have animal experts on its payroll, these people are not qualified enough to identify the creature that appeared on the surveillance footage. The zoo turned to the City of Amarillo for help, and the city sent out a message on social media to the local community to get help identifying what the bizarre creature could be. 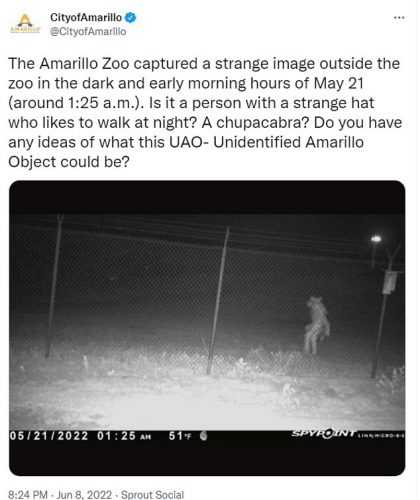 “The Amarillo Zoo captured a strange image outside the zoo in the dark and early morning hours of May 21 (around 1:25 am). Is it a person with a strange hat who likes to walk at night? A Chupacabra? Do you have any ideas of what this UAO – unidentified Amarillo object could be?”

Twitter erupted with comments from people across Texas and the rest of the country.

One Twitter wrote: “Clearly a skinwalker phasing between two densities/dimensions and what better place but the zoo. I mean. DUH.” 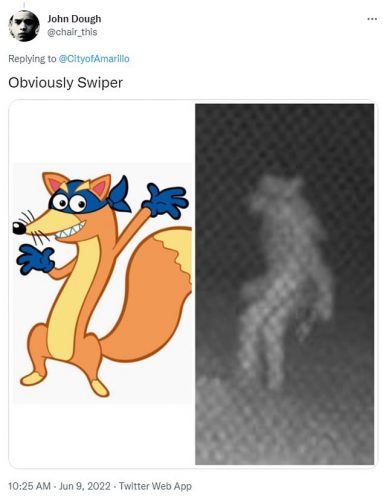 The unknown creature was walking outside of the confines of the Amarillo Zoo, which is located in Thompson Park. The event occurred in the middle of the night at 1:25 am.

According to a report published in Newsweek, Amarillo’s Parks and Recreation Department Director Michael Kashuba said that his staff found the disturbing image while reviewing surveillance camera footage. Although it was lurking right outside of the zoo, staffers assured the public that the unknown creature had never made its way into Amarillo Zoo near the animals. 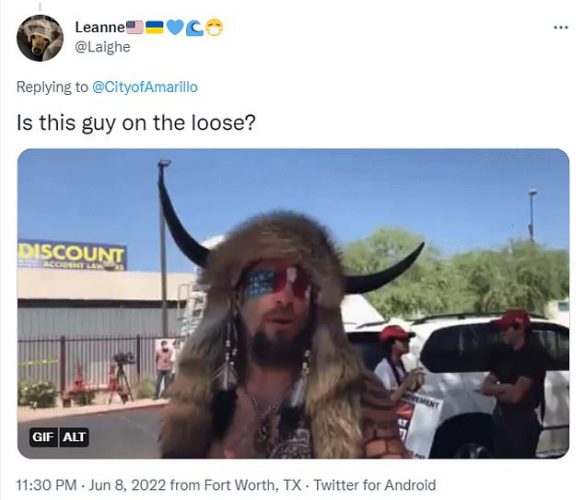 “It’s kind of an anomaly, a unique picture,” Kashuba told Newsweek. “I think it’s exciting to see the interest in something like this. It’s obviously out of the norm for us. Usually, we catch pictures of our animals moving through exhibits and things like that.”

The Amarillo Zoo is not the only zoo to have captured strange creatures on camera. In 2016, the Honolulu Zoo in Hawaii captured what appeared to be a monkey running around outside of its enclosure. However, officials were able to quickly identify the creature. It was a small dog that had gotten loose from its owner.

It is still unclear what the creature in the Amarillo Zoo surveillance footage is. But, one thing is for sure, it has given people across the internet something to talk about and speculate about. And it has also given residents of Amarillo, Texas, a good scare.