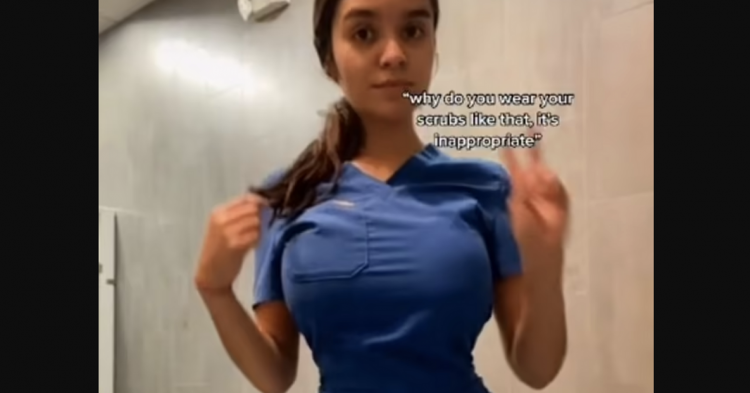 “Why do you wear your scrubs like that? It’s inappropriate!” wrote one TikTok viewer after nurse Erika Diaz, 22, shared photos of herself online. The nurse has since gone viral on the Chinese-created social media platform and believes that scrubs are supposed to be worn this way. She simply tucks her top into her pants, which reveals the voluptuous curves of her natural body shape.

Nurse Erika first displays her body in the scrubs for her viewers on TikTok. Then, in the viral video, she cuts to a picture of how the scrubs are supposed to be worn. In the online advertisement, you can see four women wearing their scrubs tucked into their matching pants, just like Erika Diaz does in her TikTok videos. However, Erika simply has different proportions than the models in the online advertisement, and her proportions upset some people on the platform. 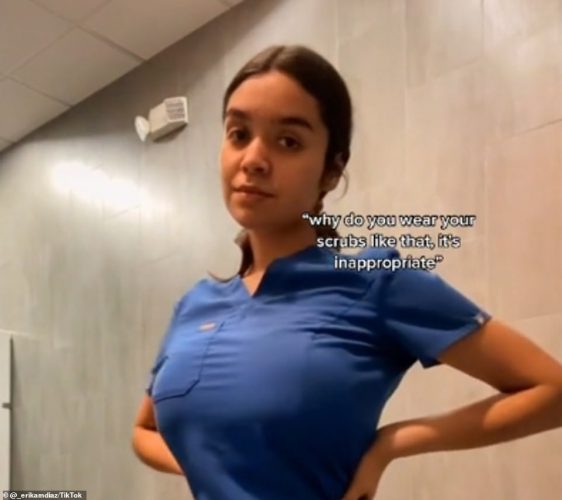 “Some people just have an issue with my body, not my scrubs, and it shows,” she wrote in the caption.

Nevertheless, Erika’s video has attracted the attention of some pissed-off people online. Her clips have received more than twelve million seven hundred thousand views and counting. She continued to debate with people about her way of wearing the scrubs in the comment section of her viral video. 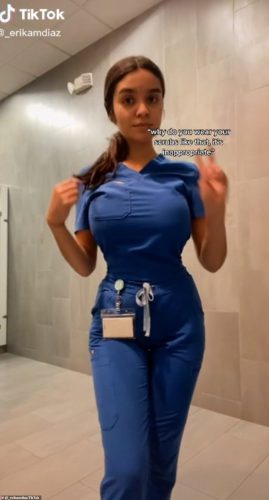 Nevertheless, the haters continued to bash the curvy nurse for her body.

Another wrote, “You simply can buy one bigger size to give you space to breathe.” 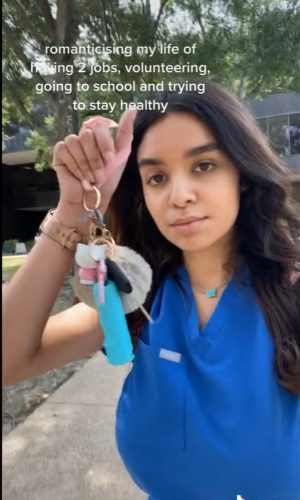 “I’m an old school director,” another person wrote in the comments. “I’d never allow that on my floor. I don’t want to see nails, perfume, or style. Keep that at home where it belongs.”

The nurse continued to defend herself against the haters.

“‘I literally work two jobs, volunteer, and I am still studying,” she added. “I’m devoting my life to the improvement of others, and anyone’s opinions are irrelevant.”

She also wrote, “I’m literally not wearing makeup, have my nails done or my hair for that fact. It’s literally just scrubs tucked in, so I don’t get stuck.” 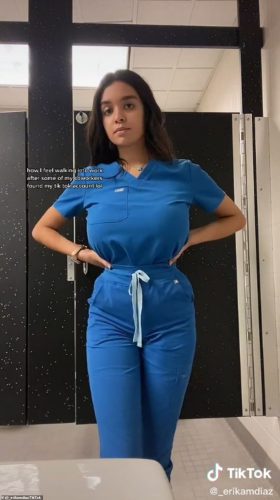 One person defended her, writing, “Anyone saying ‘buy a bigger size.’ It doesn’t really work like that. Sometimes a bigger size will be too big on the arms and too long.”

A month after the curvy nurse went viral for wearing her scrubs in a sexy way, she uploaded another image of herself in the scandalous outfit. She added the following caption to that post, “How I feel walking into work after some of my coworkers found my TikTok account lol.”

“They don’t care, though,” she added in the caption. “I will be telling them my whole life story, too, haha.”