The Couple Who Were Torturing Their Neighbors Are In Big Trouble 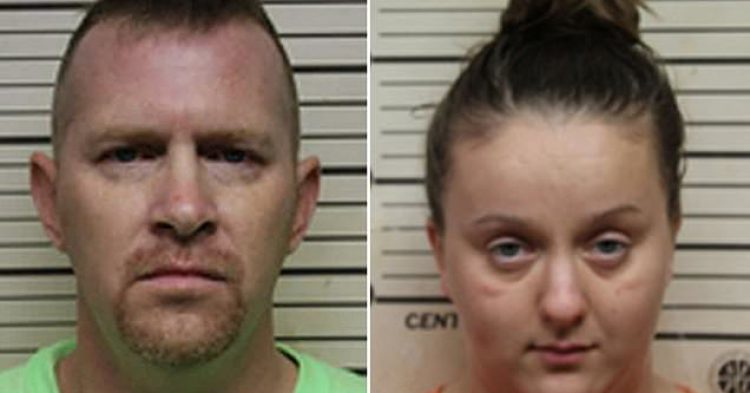 A Missouri couple did the unthinkable to their neighbors before allegedly murdering a little girl. Now 35-year-old Ethan Mast and his 21-year-old lover, Kourtney Aumen, have been arrested and charged in relation to one of the most disturbing crimes to come out of Missouri in recent memory. Police were able to connect the Missouri couple to the death of a little girl after the child’s corpse was found in Cole Camp on Sunday.

A 911 caller reported the corpse to the police. They arrived at the campsite to find the little girl wrapped in a blanket. Her body was littered with bruises all the way from her feet up to her neck.

The little girl was not the only one who was harmed during the torture session. Her two-year-old brother and the deceased girl’s mother were also attacked and are now in an area hospital recovering. The entire family seemed to have been beaten to within an inch of their lives after Mast and Aumen kidnapped them and kept them imprisoned as they tortured them.

The father of the deceased girl, James Mast, confirmed that he and his family had been regularly beaten by Ethan Mast and his 21-year-old lover. Because the victim and the perpetrator share the same surname, it is currently unclear if there is a relation. It was not yet reported if the father of the murder victim was also injured in the torture sessions.

Mast and Aumen face charges of second-degree murder, assault, and sexual abuse. They allegedly tortured the victimized family as a way to beat the “devil” out of them.

James Mast told investigators into the Missouri massacre began Sunday at 8 am. Mast and Aumen barged into the victim’s home and forced James and his wife to watch while the perpetrators beat their two-year-old son. Hours later, at 5 pm, the couple returned and began beating their daughter with a belt.

James claims that he was forced to watch Mast and Aumen abuse his family. He then was forced to watch as the abusers took the little girl outside and drowned her in a lake. After submerging her in the frigid water, they waited for her to drown and then abandoned her body by the side of the lake so she could freeze to death.

Investigators are trying to figure out why James Mast and his wife did not stop the beatings. Mast claimed that he believed the attackers when they said that his wife was possessed by a demon. They needed to “beat” the demon out of her body. They needed to make sure the demon situation was “taken care of” before the children also fell under the power of the devil.

Allegedly, James was told that he would be shot to death if he intervened in the beatings or told authorities about what was happening inside the Missouri home.

Everything changed when the girl was killed. James confessed everything to the police and said that the beatings had been going on for weeks.

The sheriff’s office was investigating and said there could be further arrests.