Sushi Bread Is Going Viral, But I Don’t Think I’m Going To Try It. 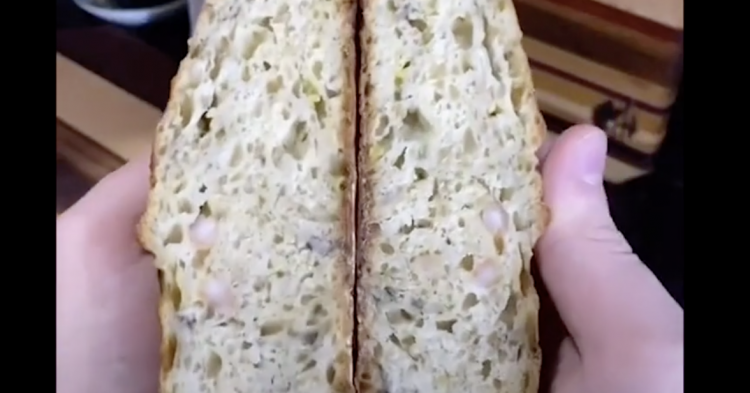 A TikTok user has set out on a mission to prove that every food – even sushi – can be turned into a loaf of bread. Although most of the videos posted to the Chinese-created social media platform by user Jojosinz are ironic, the user is totally committed to seeing if any food can become bread. The TikTok user takes a popular food item – like sushi – then adds a few ingredients so it can be baked as a loaf of bread – and the results of the stunt are surprising every time!

The videos show how the home chef usually does create a loaf of bread out of many popular foods. However, there is no proof that his bizarre recipes taste good.

Recently, the TikTok user used a McDonald’s McRib sandwich as an ingredient in a loaf of bread. The home baker folded the McRib ingredient into the bread dough and kneaded it until it was ready to be baked. When it came out of the oven, the loaf looked rather normal from the outside. But once he cut it open, it was clear that the McRib bread loaf was not something that many people would want to replicate. The fast-food sandwich had moved to one side of the loaf and did not seem to be very delicious.

“I was kind of taken aback by the inside of this. I was genuinely frightened,” Jojo said.

Another popular loaf on his TikTok channel was the Sour Patch Kid bread. After he folded the candy into the dough, he was able to bake a bread that resembled something sweat like a fruit cake. Instead of fruit, he used gummy candies as a prominent ingredient. He wasn’t that pleased with it.

“If I’m being honest, I was pretty disappointed in this loaf. It looked kind of disgusting,” he said.

However, one of his most popular TikTok videos was his sushi roll bread. Jojo decided to use a California roll for the recipe. This roll includes avocado, crab, cucumber, rice, and seaweed. He dumped a complete roll into the dough while adding yeast, bread flour, water, and some wasabi, pickled ginger, and soy sauce to give it a more “sushi” taste.

Out of the oven, the sushi roll loaf looked disappointing to the home chef. He spoke about it and how he wished it wasn’t as thin as it appeared.

“Not gonna lie. I was slightly disappointed by how this turned out. The yeast really just said no,” Jojo said about his sushi roll loaf. “It actually was fine, just like regular bread with some chunks of flavor. The flavor was about five out of ten.”

His sushi roll loaf video was viewed a lot and received more than 46k likes and hundreds of comments since it was uploaded to the Chinese-created platform. Some users suggested some more bread recipes.

“Can you make chocolate bread?”

Another wrote, “Make a bread Wellington.”

What do you think about this TikTok account’s mission to make all sorts of bread? What will TikTok users think of doing next?