Student Writes A Small Note On His Test, And Now It’s Going Viral For All The Right Reasons 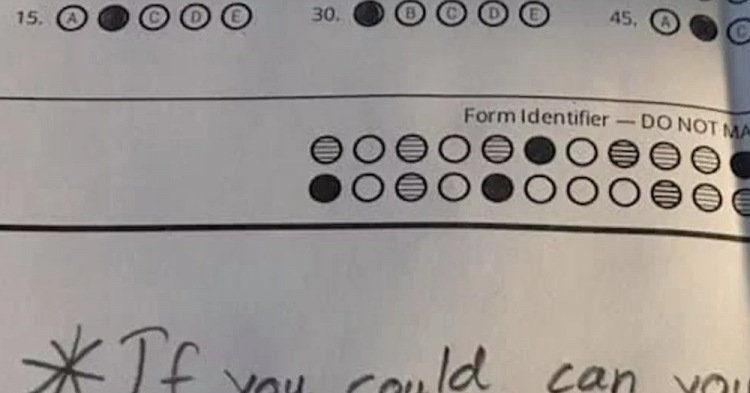 Teachers deal with hundreds, if not thousands of students throughout their teaching careers. That means it is not every day that they meet a student who is honestly original. But one Kentucky teacher was stunned when a high school student answered a test question in the most bizarre fashion, resulting in a viral moment that had to be shared by all online.

Because the student concluded their exam in the most heartwarming way imaginable, the teacher could not help but share an image of the exam online for all to see. And now that more and more people realize what the Kentucky teen decided to do with the extra space on their paper, the student is getting the credit – and respect – that he deserves.

The photo from the exam was shared on February 21, 2020. The teacher, Winston Lee, who teaches history at Letcher County Central High School in Whitesburg, was stunned to find the creative use of space at the end of the exam.

Since being uploaded, the image has earned its place in the viral hall of fame. More than 62,000 people have shared the content with their family and friends because it is just so uplifting and inspiring.

“Have to shout this out,” Lee wrote in the viral post. “Had honestly never seen this.”

Lee described the student as a “straight A+ guy,” which made the addition to the exam even better.

The student had asked the teacher to share his bonus points to the student who received the lowest score.

“If you could, can you give my bonus points to whoever scores the lowest?”

Lee was so overwhelmed by the student’s generosity that he wrote: “One of my guys… offers up his five bonus points to someone in need. Anyone. Totally offering up what is rightfully his, his earning, to any peer that may have been struggling especially hard the day of the test.”

Lee was so overjoyed by the student’s act of generosity that he continues to fawn over the unnamed student, “He didn’t care if he considered them a friend, didn’t care if they were cool, didn’t matter to him what situation had caused them to score lower, he just wanted to help, be kind, commit a loving act.”

The gushing, emotional teacher concluded: “This note gave me so much hope. Let us all be a little more like this young man!”

Critics of the boy’s actions called him a “liberal” because he was sharing what he had earned rather than hoarding it for himself.

Another person wrote, “I teach college, and I have all manner of students from all walks of life. Some are immigrants (YES, they came here the legal way, so calm down!) who struggle with English as a second language. Some are parents; some are grandparents, some work two or three jobs just to exist while trying to better their lives. Believe it or not, what affects them outside the class affects them inside the class as well. As a teacher, I expect all my students to try their best, but I realize that some have life harder than others, and I go the extra mile to be equitable. Remember, not everybody can be a lazy moocher with a rich daddy who can purchase diplomas.”