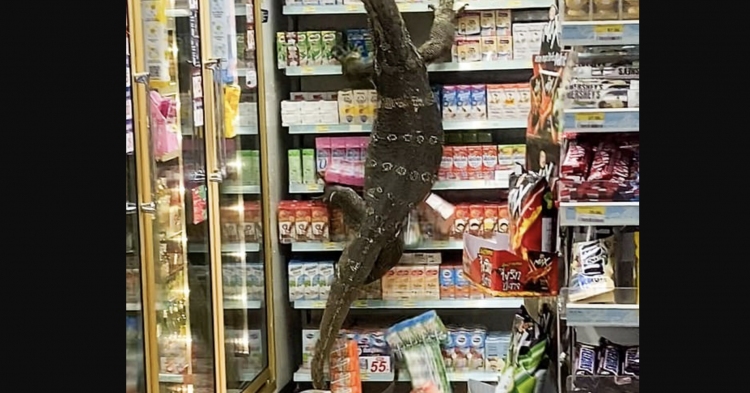 A massive reptile was caught patronizing a 7-Eleven convenience store in Nakhon Pathom, Thailand. Shoppers were shocked to see that they were sharing the store with a six-foot monitor lizard that began climbing all over the shelves. The lizard’s presence sent the store into a panic because people were terrified that the lizard had emerged from a nearby canal and run for safety into the 7-Eleven store.

Customers and workers alike hid behind the counter and shelves to avoid getting too close to the lizard. Because the critter was so big, the staff did not dare try to confront it for fear of getting bitten by the beast. The lizard did not face any resistance, so it was able to mess up the store and knock the product to the floor as it rampaged across the shelves. 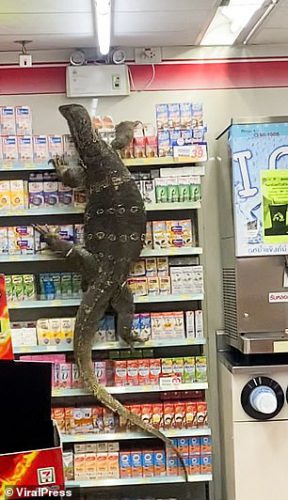 An employee said: “The monitor lizard stayed on the shelf for an hour. The rescue team arrived and chased it away. But they didn’t catch it. It just ran away into the bushes. I’ve never seen a monitor lizard that big in my life, so it was a surprise for one to come in the shop.”

The clip of the monitor lizard inside the Thai 7-Eleven location was recorded on April 6, 2021. The video was shared on social media, where it promptly went viral because it shows such a shocking scene. 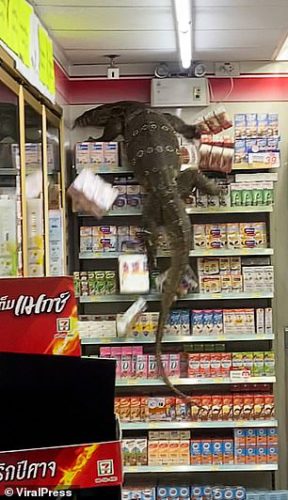 After the lizard tries to enter the fridge, it moves its attention to the shelves. The massive reptile then climbs up to the top shelf, where it rests for a moment, knocking products to the ground as it moved.

One customer, Narumpa Tangsin, was completely shocked that the lizard climbed out of the canal and sought refuge inside the convenience store. 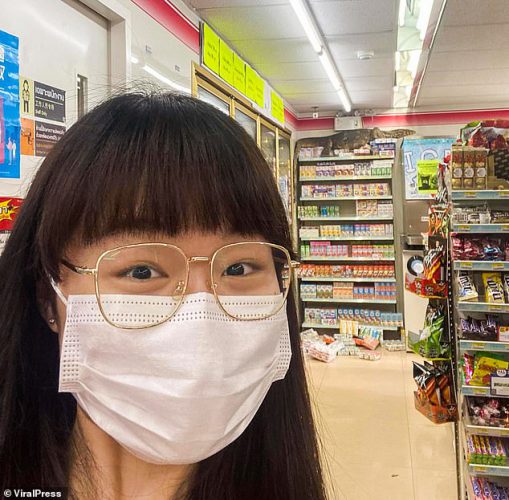 “I only stopped at the shop to buy some food and then saw the huge monitor lizard inside. I wanted to buy a drink, but the animal was too close to the drinks aisle,” Tangsin said. “They’re dangerous animals, especially when they’re angry, so I stayed back and recorded it on my phone. I guess that shops have everything, even for lizards.”

Fortunately, animal rescue workers were able to get to the convenience store before the lizard or anyone was hurt. They managed to force the animal out of the store and return it to the undergrowth nearby.

The monitor lizard did not eat any food during its rampage through the locale. Instead, it seemed to simply have been seeking a safe place to lounge and decided that the top shelf was the best place for it to go. 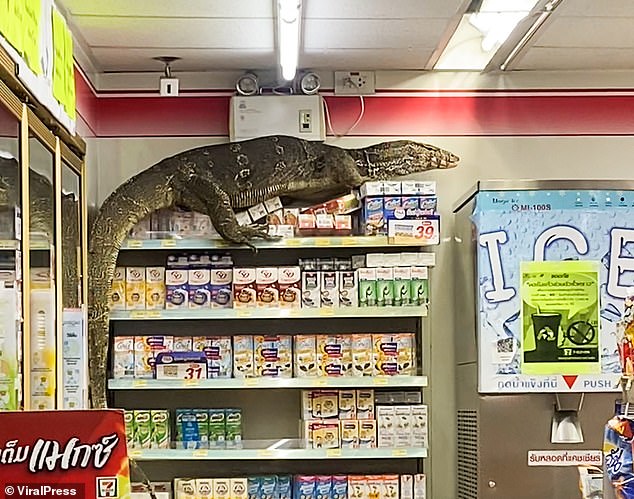 Over the last few months, Thailand and surrounding parts of Asia have been struck by a lack of rain. This monitor lizard is believed to have been low on food because of the drought and was probably seeking sustenance when it entered the store.

Asian water monitor lizards are common in large cities in Thailand. They live in canals and ponds and feed on fish, snakes, frogs, and food scraps left behind by humans. Monitor lizards can get aggressive if they feel threatened and have a mildly venomous bite. They sometimes carry dangerous bacteria as well.