Mom Gets Slammed For Making These “Abusive” Meals For Her Toddler 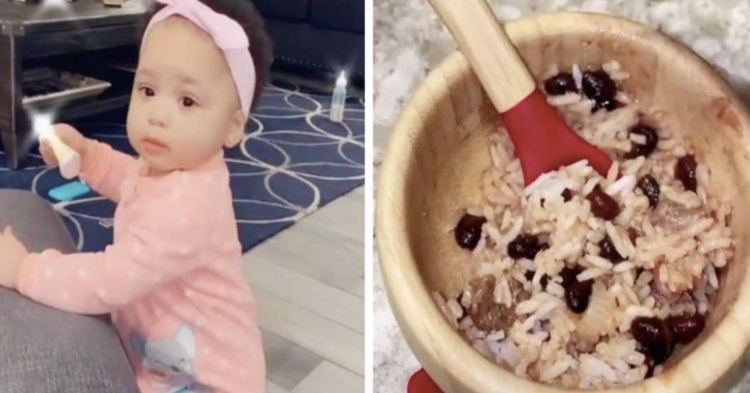 Over the course of her life, Grace Walters has experienced a lot. She grew up in the Congo before she traveled across the Atlantic Ocean to relocate her entire life to New York. Because she came from an African country, she was well versed in African dishes, which is why she feeds them to her 13-month-old daughter, Zuri. Mom decided to share some of her culture with fans and followers on TikTok, so she pulled back the curtain and showed off the flavorful meals she has been making for Zuri – but the response from some critics was absolutely astounding.

On Walters’ TikTok page, you’ll find plenty of fun videos showcasing parenting tips as well as cooking and cleaning tutorials that can help anyone out, not just busy moms who are always on the go. While most of her followers are supportive and understanding about the fact that she comes from a culture that is different from what is common in America, she also has to deal with her fair share of negative comments. But some people have taken their attacks a bit too far, accusing Walters of child abuse because she feeds her toddler African meals.

“Where I come from, we don’t have baby food in containers and jars,” Walters, who posts content via @Texykitchen1 on TikTok, explained to Today. “I’m giving Zuri what my mother gave me,” she continued. “She likes curry. She likes lamb. She likes Jamaican food too.”

However, internet trolls were unforgiving and immediately criticized Walters for feeding her child food that was not part of the American culture.

Another narrow-minded person added, “Who would ever feed their kid that disgusting food.”

In the comment section of a video where Walters spoons curry into her daughter’s bowl, a troll wrote: “What in the dog-cat food?”

One person even threatened to end Walters’s happy home life. They wrote a threat to the dedicated mom that said, “I’m calling CPS. Who feeds (their) child that?”

It seems that no matter what Walters does, she can not please people on TikTok. She’s been criticized for giving her daughter water, and some vegetarian moms have even complained about her feeding her child meat products.

“It hurt my feelings a lot in the beginning,” Walters admitted to Today. But mom feels she is “not doing anything wrong.”

Although Walters has been struck with a lot of negative criticism and blind hate, she does have plenty of supporters who are willing to learn from a culture that is different from their own.

“The best mom,” one commenter wrote on her video from November 20.

“I am VERY confused as to why anyone would say they would call CPS on you,” another person commented on that same video.

“This is a good woman,” another commenter added with authority. “Anyone who thinks differently doesn’t understand what it is to be a GOOD MOM.”

“The only food I limit before a child is a year old is honey because of botulism, and milk because they don’t need it,” Dr. Amosun said. “I don’t give kids food restrictions after a year as long as they don’t have food allergies.”

♬ Therefore I Am - Billie Eilish