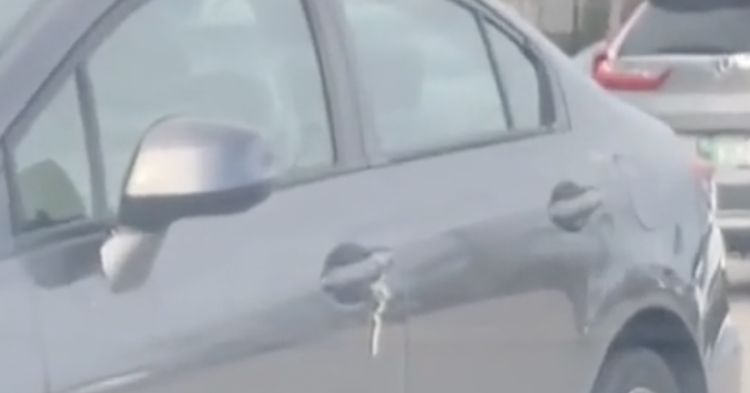 TikTok users have noticed the rise of a terrifying trend and are desperately trying to warn people about it. According to those in the know, people are tying ribbon and wire around a car door handle to signify something seriously sinister. The initial video that sparked so much dialogue was posted to the Chinese-created social media platform by user Ice.Lemon.Water who filmed a video while driving by a parked car.

In the video, the parked car has a string wrapped over its driver’s door handle. The TikTok user wrote in the video: “WTF is this a joke someone better not get kidnapped” and captioned the post: “We thought it was a joke at first until we found the second one.”

This TikTok user spotted two instances of a ribbon being tied to the door handle of a vehicle. This has been rumored to symbolize a possible kidnapping. Another TikTok user named Reece, who posts under his account, AChunkyGuy, provided his own input on the alarming trend that seems to be growing more every year.

“What you see on that car handle right there is wire,” Reece claimed. “The reason people use wire is because it’ll distract you for longer, it’ll take longer to get it off.”

If you’re wondering how these ribbons could possibly put someone at risk of kidnapping, allow me to explain. The person looking to do the abducting puts the ribbon or wire on the door handle of the car so the car owner will struggle to remove it when they arrive back at their vehicle. While the driver is distracted, the kidnapper can approach and abduct the person – possibly with the use of a weapon.

After the first video from Ice.Lemon.Water went viral, the TikTok user returned to respond to Reece’s comment and to claim that the tie they found in the parking lot appeared to be the type of ribbon used to tie balloons.

Nevertheless, Reece wants Americans to look out for this warning sign. If you see a ribbon or wire on your car’s door handle, you should beware and not approach the car alone.

“Tactics like this are being used in the U.S. prominently,” Reece claimed in a follow-up video. “People put stuff on your car to distract you for that split second so they can grab you before you get to your car.”

There was another video posted to TikTok by user Haley West who noticed a water bottle left on the hood of her car. When Haley went to remove the bottle, a man hurriedly approached her but did not get close enough to kidnap her. Instead, the man ran back into a store to hide his identity.

“The best thing you can do in that situation is: Go back to wherever you were that was the most populated and grab somebody to escort you to your car,” Reece suggested.

“This happened to me,” another TikToker claimed. “I called my friend’s mom, who’s a cop, and it turns out there was a tracker on my car … scary.”