He Said His Parrot Could Sing My Favorite Song. I Didn’t Believe Him Until The Music Started. 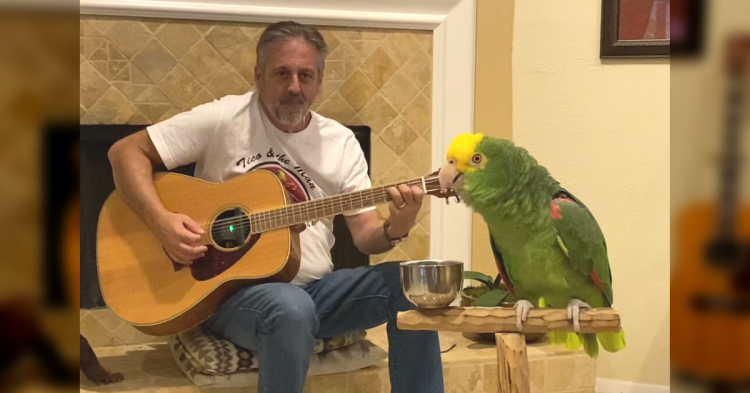 Over the last year, people have spent more time at home than they have in recent memory. Coronavirus lockdown measures forced people to figure out more ways to fill the time while locked inside at home. Fortunately, some creative people turned to art and music to fill the void – like Frank Maglio Jr., who had to work from home during the pandemic.

Because Maglio has diabetes, he was at increased death from COVID-19 if he contracted it. That’s why he was given special permission to work from home throughout the pandemic to ensure that he did not expose himself to unnecessary risk. While spending more time at home, Maglio was able to explore new hobbies and passions that had previously gone unexplored.

One thing that came out of his additional time at home during the pandemic was his performance art with his parrot, Tico. Maglio had been playing his guitar one evening when Tico, an Amazon parrot, starting singing along with the song. The pet owner decided to record the bird’s performance and uploaded a video to Facebook. The clip quickly went viral, attracting millions of views.

Because Tico’s first video performance was such a hit, Maglio decided to record a second video. In this one, Tico is “uncaged” and singing along to the Led Zeppelin hit “Stairway to Heaven.” Although the bird is not a perfect singer, the parrot does its best to nail down the melody and sing along to the guitar playing. Clearly, it was a hit among Americans because the YouTube video also went viral with nearly two million views at the time of this writing.

Maglio shared the video to YouTube along with the following description: “Last night we remade Stairway to heaven. It was one year ago that we shot that 1st video and posted it to Facebook, not knowing millions of people would eventually be watching. It was purely discovered & launched Tico’s fame. Let’s do this again pls share.”

Thousands of people shared their thoughts and reactions to the parrot’s performance of Stairway to Heaven in the video’s comment section.

“We are an instrumental band, but we’d make an exception for the amazing Tico.”

“What a lovely man – he plays beautifully but is still willing to be upstaged by his musically gifted parrot. These videos give me so much joy – and this one in particular. Lucky little bird. It’s clear daddy loves him.”

“He’s a bit bird-brained, naturally, but you can tell he’s listened and remembers the real song.

Sometimes he hits around parts of the original melody, but he’s really out there on his own stuff, just jamming.”

One person was reminded of their own pet after seeing the video.

“My budgie used to compose accompaniments to music we heard, ringing his bell at different tempos and in musical ways frankly he understood better than I would, and vocalizing subtly in accompaniment. He died this spring. I miss you, Little Genius.”

What do you think about Tico, the parrot’s performance of Led Zeppelin’s Stairway to Heaven?