Dog Walks Up To Officer And Starts Barking Aggressively, Points Cop In The Direction To Run 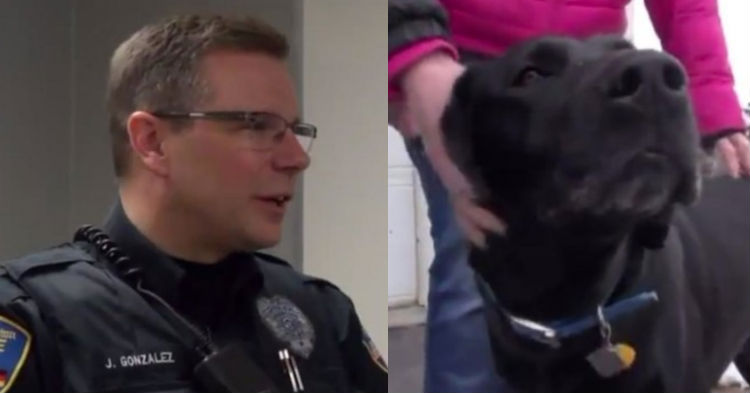 While dogs make great pets, they are also known as heroes which is why they prevail in war zones, helping soldiers detect dangerous areas. It is also for this reason that they make great partners to police officers and have the sense to sniff out drugs, assisting with tracking down criminals. But sometimes we are surprised by a dog that is just considered the family pet.

When Officer Jeff Gonzalez was patrolling the area in Washington County, Wisconsin on a frigid February day, he noticed a lone black lab roaming the streets. As he approached the dog, he realized the pup was wearing a collar so he assumed he belonged to someone.

The dog, who was in obvious distress didn’t hesitate to flee into a nearby Germantown neighborhood.

“He stood there and barked a little bit, then I rolled down my window and called to him,” Gonzalez said. “Then he wagged his tail and got more friendly until I got out of my car. And then he ran a little bit.”

Because Germantown is fairly small, the police officer didn’t have trouble following the dog, concerned for his safety. He followed the pup along the safe streets in Germantown and soon learned that the dog, known as “John Boy,” was trying to send him a message.

John Boy led Gonzalez to his owner, who appeared to be collapsed in a chair in her front yard. Gonzalez obviously knew something was wrong so he got out of his car and assessed the woman, who he deemed unresponsive.

“To be honest with you, I thought she was dead,” Officer Gonzalez later admitted. “And when I went up, she was very cold to the touch. Her lips were blue.”

It was then that the experienced cop realized there was the faintest hint of life left in the woman, who he later learned was named Krystal.

“I was able to determine she was breathing and had a pulse,” he revealed. “I called for assistance and my partner was close. So, together, we got her in the house.”

“Basically what he told me was, he said that they thought that she was dead,” said Wendt.

Soon after Wendt arrived, Krystal was taken to the Community Memorial Hospital in Menomonee Falls, Wisconsin. It was there that doctors monitored Krystal’s heart condition and ran tests on her. Krystal was soon on the road to recovery following the the care she received at the hospital.

Gonzalez later discvored that Krystal had taken John Boy out just moments before she collapsed and had become unconscious. Evidently, she was in the same spot on her lawn for two hours while John Boy desperately tried to get someone to come to the rescue. As luck would have it, Gonzalez just happened to be in the area when John Boy was on a mission to get help.

This just proves that dogs are much smarter than we give them credit for and it’s always best to listen when your dog speaks.