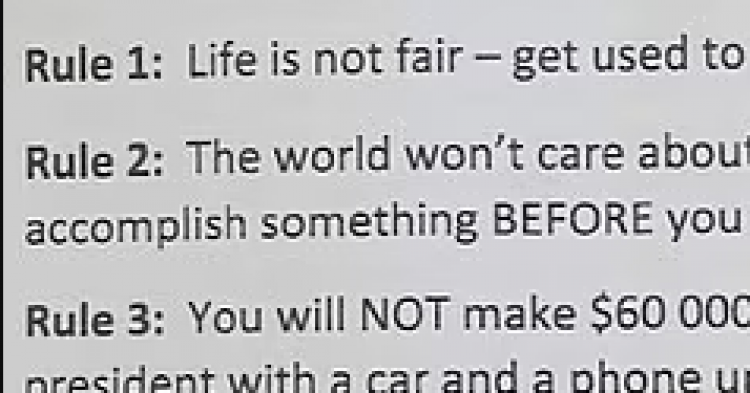 Dad was very proud of his teenage daughter when she got a job and showed up on her first day of work. However, she returned home with a list of rules from her strict boss that left dad utterly dumbfounded. He decided to snap a picture of the rules and turn to social media to express his outrage at the boss for giving the teen the “disgusting” letter on her first day of work.

The list included eleven rules that the boss wanted the teen worker to “understand” before getting entitled or lazy. However, the father was shocked that his teen, who lives in New Zealand, was given such a hard life lesson on the first day of employment. He waited until after his daughter quit the horrible job before tweeting about the rules. 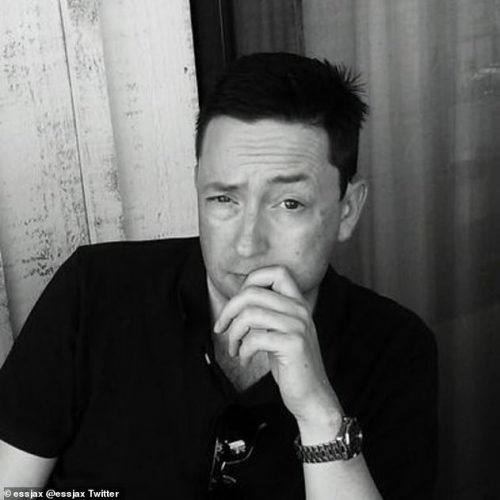 He wrote: “Kid recently left her job at a local retailer (which employs mostly 16 year-olds to play well under min wage). This is a letter she received from the boss when she arrived on her first day on that job.”

The letter has been circulating the internet for years and has been attributed to both Bill Gates and Steve Jobs by some people. However, social media users were appalled that the boss would hand this out to young workers on their first day on the job. 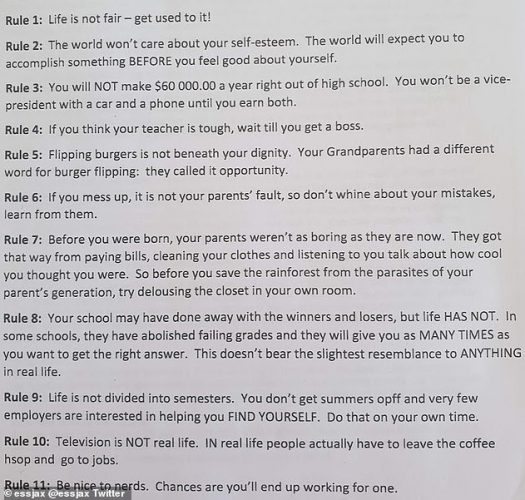 Rule 2: The world won’t care about your self-esteem. The world will expect you to accomplish something before you feel good about yourself.

Rule 4: If you think your teacher is tough, wait till you get a boss.

Rule 5: Flipping burgers is beneath your dignity. Your grandparents had a different word for burger flipping: They called it opportunity.

Rule 6: If you mess up, it is not your parents’ fault, so don’t whine about your mistakes; learn from them.

Rule 7: Before you were born, your parents weren’t as boring as they are now. They got that way from paying bills, cleaning your clothes, and listening to you talk about how cool you thought you were. So before you save the rainforest from the parasites of your parent’s generation, try delousing the closet in your own room.

Rule 8: Your school may have done away with the winners and losers, but life has not. In some schools, they have abolished failing grades, and they will give you as many times as you want to get the right answer. This doesn’t bear the slightest resemblance to anything in real life.

Rule 9: Life is not divided into semesters. You don’t get summers off, and very few employers are interested in helping you find yourself. Do that on your own time.

Rule 10: Television is not real life. In real life, people actually have to leave the coffee shop and go to jobs.

Rule 11: Be nice to nerds. Chances are you’ll end up working for one.

What do you think about these “rules” of work?