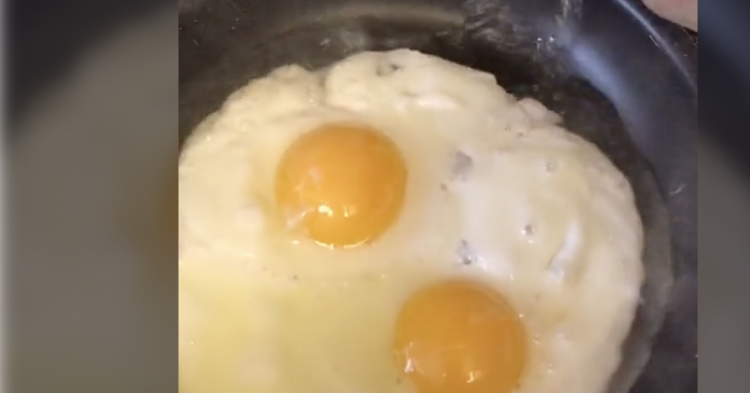 Do you flip your fried eggs? According to one viral TikTok video, you’ve been making breakfast all wrong. That’s right. This new trending breakfast life hack has people questioning their tried-and-true method for making fried eggs in the morning. Although the trick undoubtedly works, some critics doubt that it’s worth the effort. Nevertheless, a TikTok user named @user3136491744604 has uploaded a controversial breakfast video that has people trying an entirely new way to start their morning off on the right foot.

The viral video quickly became a trending topic on TikTok after thousands of people expressed their support for it. After you watch this quick tutorial, you’ll know a way to cook fried eggs without flipping them at all. Whether or not you feel that this breakfast trick is worth the effort, it might come in handy on those days you forgot to clean your spatula or if it’s still stuck in the dishwasher.

The video, which has earned nearly 800,000 views since it was uploaded, opens with the filmmaker showing a small frying pan filled with two cracked eggs. The video maker then takes some fresh water in a cup and pours it around the side of the fried eggs. The water quickly begins to boil as it acclimates to the hot temperature in the frying pan.

With the water surrounding the fried eggs, the TikTok user then places a cover over the frying pan to keep the steam inside of the pot. The breakfast then cooks for a few moments. The steam gets trapped by the cover and works for cooking the top of the fried eggs, which means you never have to flip them over if you don’t want to.

The method works quite quickly. When the time comes for the video maker to reveal the finished product, she pulls back the cover and reveals a pair of perfectly cooked fried eggs. Although this method is a bit different than flipping the eggs over and letting them cook on the frying pan, it does combine two methods that are very popular – frying and poaching eggs.

TikTok users flooded the video with comments. Many claimed that they’ll only be cooking fried eggs this way from now on, while others say the opposite – that the method is more trouble than it is worth.

One person even suggested the method without adding the water.

“Never tried a vented lid,” one person wrote. “I typically use less water, too. I’ll give it a try.”

“I do this, but I actually don’t use water at all. It steams on it’s own if you just put a pot lid on it.”

‘You don’t need water. Just use a pot cover for the pan,” another person suggested. “Cook as normal. I do it all the time.”

“It totally ruins the texture of the egg for me,” wrote one critic.

“Save time and just flip them! Jeez, how lazy are you?”

What do you think about this method of cooking eggs?