Baby Elephant Cries For Hours After His Mother Rejects Him 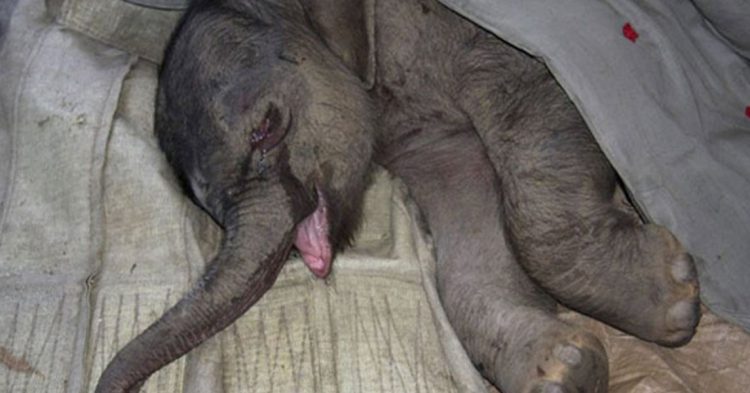 Cynics will tell you that animals do not feel emotions. They’re soulless beings that are subhuman and do not deserve our sympathies. While this belief is not as common now as it was a few decades ago, there are still plenty of people out there who look at animals like some sort of inferior race. They think of human beings are superior and the owners of everything on this planet – but this footage proves that animals have feelings as well.

It is common for animals to express their happiness or sadness when something does or doesn’t go there way. Think of a dog that is jumping for joy when its owner comes home from a long day at the office. Or think of a dog that misbehaved and knows that it is about to get punished. These two animals exhibit very different behavior because of the emotional situation they find themselves in.

Volunteers at the Shendiaoshan Wild Animal Nature Reserve in Rongcheng, China, found an elephant in a state of utter distress. The poor creature couldn’t stop crying for five hours because its mother rejected it. The mother had attacked the baby elephant and then left it alone to die, and the baby just could not bear the weight of that realization that it had been rejected by its own mother – the elephant that should have loved and adored it more than any other creature.

Fortunately, this baby elephant had volunteers at the nature reserve ready to jump in an help. And while the baby was distraught and emotionally broken following its abandonment, the volunteers at the location were able to offer it help in its time of need.

“He couldn’t bear to be parted from his mother, and it was his mother who was trying to kill him,” one of the employees said.

The incident occurred back in 2013. At the time, the photos of the crying baby elephant went viral. People were heartbroken to think that its mother had abandoned it in its time of need. The baby elephant eventually recovered enough. But it struggled to adapt to regular life. It needed someone to care for it.

Fortunately, one of the zookeepers adopted the baby elephant, who was named Zhuang-Zhuang. They have given the baby very good care ever since.

“Watching animals my whole life I’ve always been struck by how similar to us they are,” award-winning environment writer Carl Safina wrote. “I’ve always been touched by their bonds and been impressed—occasionally frightened—by their emotions. Life is very vivid to animals.

He added, “In many cases, they know who they are. They know who their friends are and who their rivals are. They have ambitions for higher status. They compete. Their lives follow the arc of a career like ours do. We both try to stay alive, get food and shelter, and raise some young for the next generation. Animals are no different from us in that regard, and I think that their presence here on Earth is tremendously enriching.”